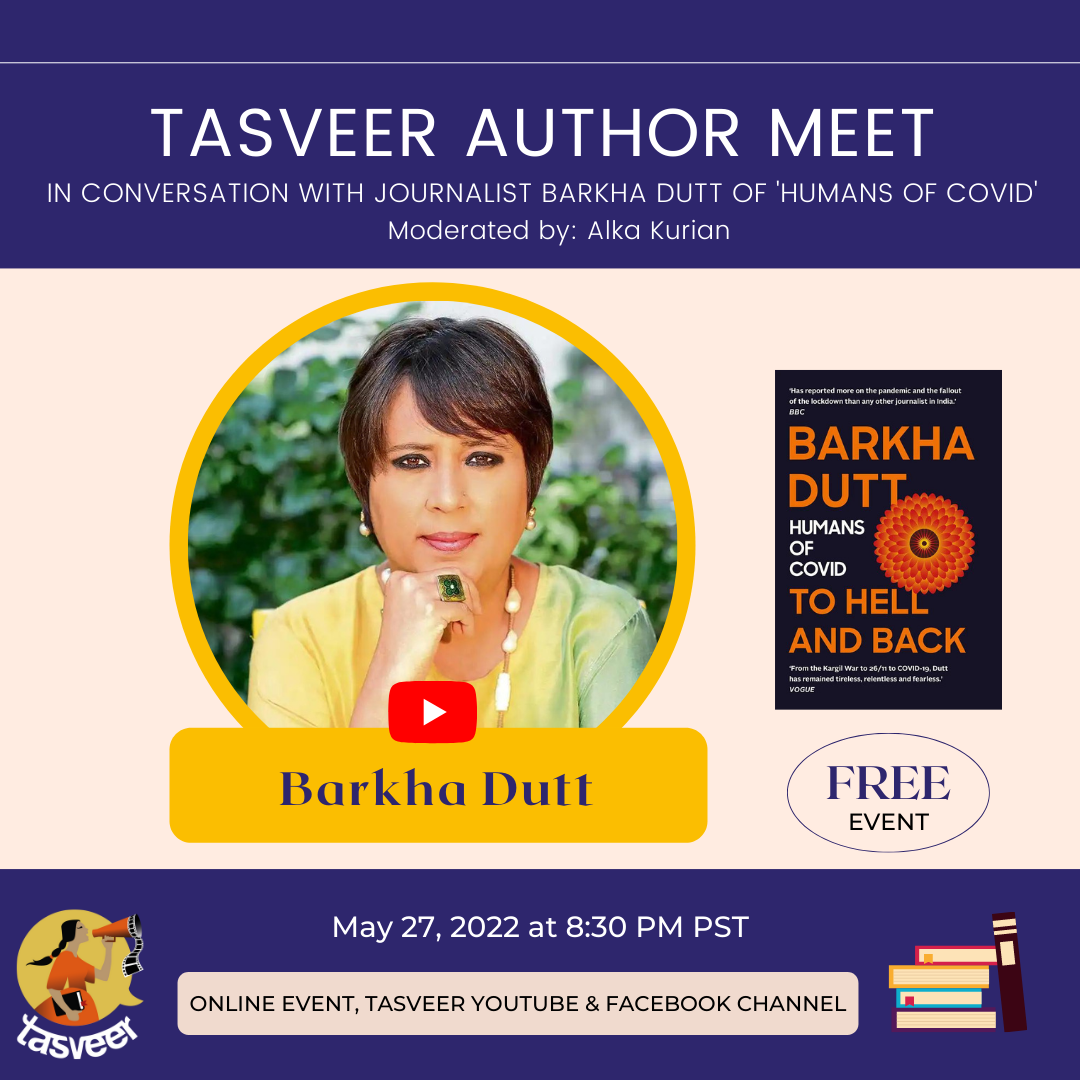 Tasveer Author Meet: In Conversation with Journalist Barkha Dutt of ‘To Hell & Back: Humans of COVID’

Tasveer Author Meet: In Conversation with Journalist Barkha Dutt of ‘To Hell & Back: Humans of COVID’

We’re back with the Tasveer Author Meet! Joining us is the world famous journalist Barkha Dutt, for a reading from her book ‘To Hell and Back: Humans of COVID’ followed by a Q&A. When India’s lockdown was first announced in March 2020, acclaimed journalist Barkha Dutt started an extraordinary series of road trips, recording the human story of the pandemic. In this book, she tells India’s pandemic story through the stories of the people she covered – the migrant workers and politicians, businessmen and bureaucrats, doctors and nurses, factory workers and farmers, teachers and students, husbands and wives, parents and children.

Through these accounts, she draws a startling picture not just of our plague years but the very nature of our country with its deep-rooted inequalities across class, caste and gender. Moving, gripping and vivid, To Hell and Back is an outstanding work by one of our foremost journalists, working at the height of her powers.

Author: Barkha Dutt Barkha Dutt is an award-winning TV journalist, anchor and columnist with more than two decades of reporting experience. She is India’s only Emmy-nominated journalist who has won multiple national and international awards, including the Padmashri, which is India’s fourth highest civilian honour.
Barkha graduated from St. Stephen’s College, Delhi with a degree in English Literature. She did her Master&#39;s in Journalism from the Graduate School of Journalism at Columbia University in New York.
Barkha has reported from some of the toughest spots and conflict zones in India and across the world including Pakistan, Iraq, Afghanistan, Libya and Egypt. Her frontline reporting of the Kargil war first made her a household name.
She is an out spoken feminist voice on the global stage and also the Founder-Editor of Mojo, a multi-media events and content venture. She is also the founder of ‘We The Women’, a multi-city festival and current affairs website that focuses on the biggest gender debates of
our time.
She is a featured Columnist with Washington Post; appears regularly as an analyst on CNNand BBC and is also a Contributing Editor at The Week magazine.

Moderator: Alka Kurian is an Associate Teaching Professor at the University of Washington Bothell and a recipient of the 2020-2021 Fulbright US Scholar award to Morocco. She is the author of Narratives of Gendered Dissent in South Asian Cinemas (Routledge: 2014) and a co-editor of New Feminisms in South Asia: Disrupting the Discourse Through Social Media, Film and Literature (Routledge: 2017). She is currently working on her third book Transnational Fourth Wave Feminisms: A Postcolonial Backlash (forthcoming 2023 Routledge). She has published extensively on South Asian film and feminism and was the founder-co-editor of the peer-reviewed journal Studies in South Asian Film and Media. Alka Kurian is the board president of Tasveer, director of the Tasveer South Asian Literary Festival, and host of the podcast South Asian Films & Books.